Malacca is easily one of my favorite state and I visit the state as much as I fly back to my hometown. Good food are abundance and it's considered a "cheap getaway" when you're just too tired of living in KL. My first date with le boyfriend was also here so we try to come back here as much as we could just to spend some quality time together. I'm actually typing this from my hotel room in Malacca. We're currently staying in this nice new boutique hotel that is quite far from the town. :) 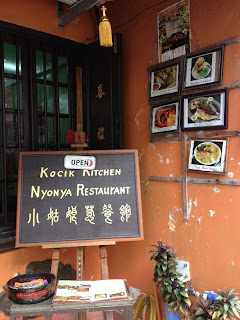 Kocik Restaurant was a place we stumbled upon when our Plan A did not work. Our initial plan was to dine in Peranakan Restaurant right opposite but upon entering, the waitress literally shoo-ed us away and repeatedly say "it's full, it's full" even though there are quite a few empty tables - granted they may have been reserved. I'm very pantang with bad service like this and we weren't even given the option to you know, wait for available table. Hmph. 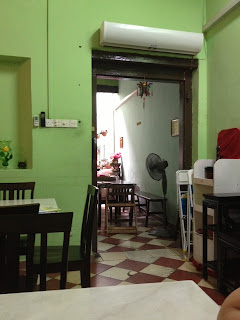 The owner here was a very nice lady and I felt she needed us as a customer much more than the other ahem, famous restaurant need us. We felt welcomed as she took the time to explain to us the dishes despite the restaurant being full on that day. The place too felt more like a home rather than a restaurant. 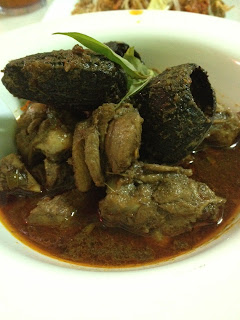 I had always wanted to try the "Ayam Buah Keluak" and finally had the chance to have it here. Apparently we are suppose to scrape the candle nut with the small spoon provided and mixed it with white rice.  Taste very much like fermented black bean but much more palatable. Goes really well with white rice. While the nut appears to be very flavorful I find it weird that the chicken do not carry the strong flavor of the nut. I still really like the dish though. The nut is addictive! 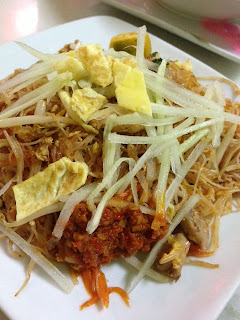 We also ordered fried bee hoon to share since we didn't want to have too much rice. It was nice, edible but really nothing to shout about. You can give this a pass. 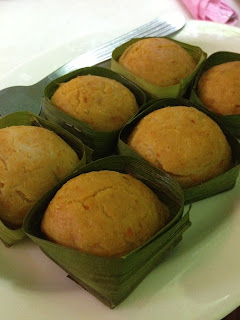 Otak Otak here taste very different from what we normally have. The strong turmeric taste is absent and with its bouncy texture I find that it resembles a lot like fish ball instead. Worth trying though I think I still prefer the conventional otak-otak. 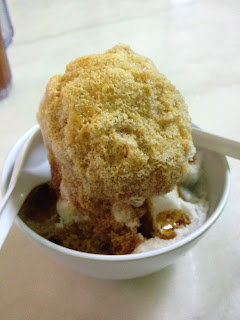 A typical Nyonya meal would not be complete if a good bowl of chendol is not included. They are really generous with cocounut milk but I prefer mine to be less rich and more of the gula melaka instead. I still find Donald and Lily's chendol to be the best thus far.

There's a lot Nyonya Restaurant around in Malacca and going through all the positive reviews in Trip Advisor I would say this is one of the 'safe' restaurant to dine in if you're in the state and looking for authentic Nyonya food. I would definitely return to try the rest of their menu!

... a.k.a the only wantan mee that I will eat. I come from the land of kolo mee and my taste bud have refused to give in to another similar egg noodle but this is the only place I give an exception. The place only opens after 6.30 pm and is open until as late as 3 a.m. The next morning the same place transform to a workshop. 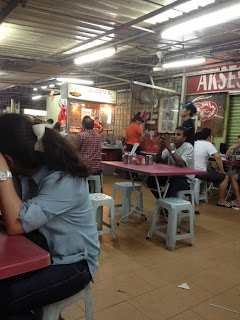 The place basically serve only one type of noodle but you have a number choices of sides to come along with it. Ranging from almost all things pork - char siew, vinegar pork leg, hakka stew pork and a few other pork dishes. The two chicken dish would be the braised chicken feet and curry chicken. 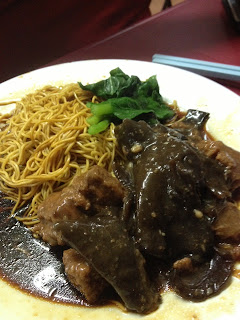 I think one of the reason why I would eat the wantan mee here is the fact that the noodles is not overly drowned in dark soy sauce (still look yellow!), instead it was the pork lard used that made most of the taste in whole.  The texture also is almost identical to kolo mee, more "kiu" and less the egg flavor. 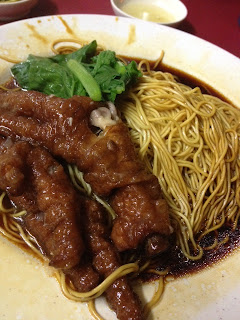 The curry wildboar here is remarkable. It's rich but not overly thick and is spicy enough to give the oomph! I polished this plate clean including the gravy. hehe. I only wish the meat could have been less lean. If there is one thing you must not missed here then it is the curry wildboar! 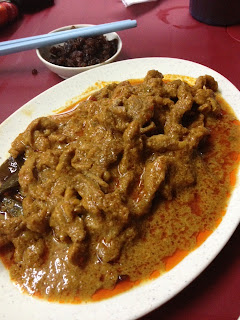 The sui kow or wantan soup is also worth to try if you wanted a side dish. They are pretty generous with the filling of the dumplings and I find the clear soup to be flavorful. 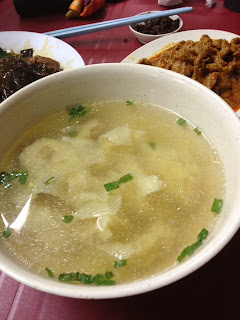 Everything pictured cost us RM 23.50. Pretty reasonable by KL standard and food quality is guaranteed. If you've never heard of this place, here's the coordinate for you :

Landmark would be the BHP Petrol Station just right after South Gate.
Posted by Melanie at 9:12 PM 2 comments:

"Nestled in the curve of Kinta Valley and is Ipoh's best secret " is their tagline and they have managed to live up to it. This is indeed Ipoh's best kept secret.

We were initially put off with the fact that the location is in Tanjung Rambutan and with so little reviews , we were quite skeptical. It was a last minute plan for Valentine's and most places do not have rooms anymore. I guess it was a blessing in disguise that most places are fully booked as this place is truly a gem. 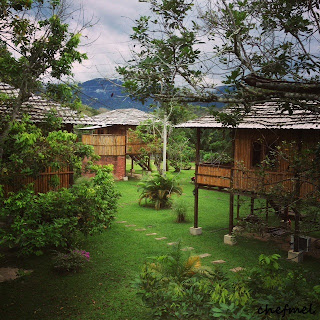 We had booked two different room for two nights as they are fully booked. The first night we stayed at the Orchard Villa Deluxe. I felt like it was architectured perfectly for couples. The bed, the outdoor bath room and most of all the Jacuzzi! To have it outdoor right smack in a natural surrounding was mentally soothing. We spent the night soaking inside, drinking beers and repeated the same the next morning after breakfast. 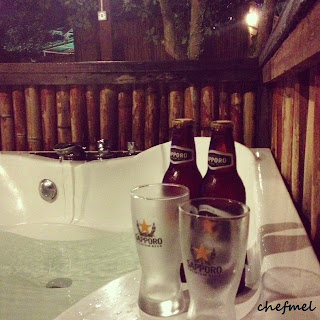 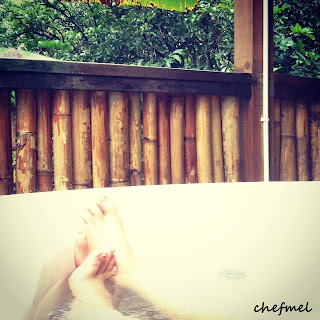 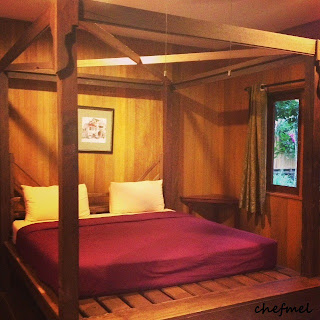 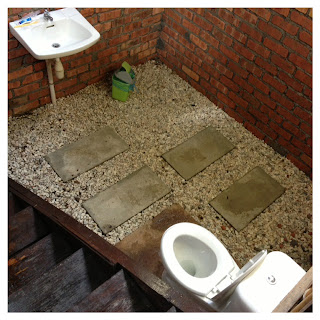 The second room we had was a room with 6 single beds and located a tad too near from the reception.  As we're just a company of two, 6 beds is obviously too much and we really wanted some privacy so we requested to change to other room. It was full house and left with no choice, they gave us the Tree House. It was really built on a tree! 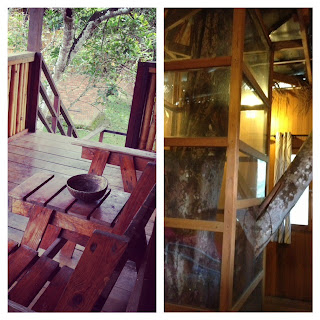 It was much more private but it was located too near from the road making sleeping almost impossible. So if you're planning on a trip here then I would suggest you to book early so you'll be able to choose the rooms that suits your needs best. We appreciated the effort in accommodating our request nonetheless.

I believe you can actually swim in the river but it seems quite deep and since I can't swim I reckon it would not be too safe for me. And if the river is not for you then there's also the "modern river" to swim in. For those who can't swim like me, you can always hang out at the deck chairs or at the gazebo if your entourage/partner prefers the river. 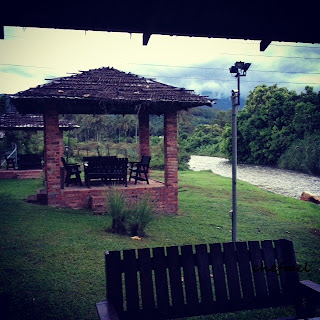 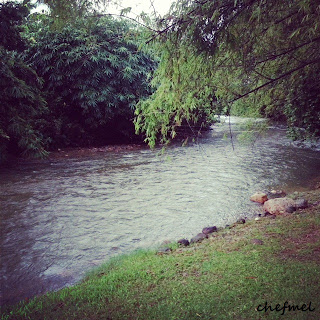 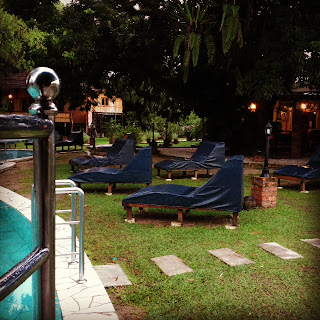 We requested to use the BBQ pit on the first night and thought it was going to be a private one just outside our room but they had it in the main lounge which we didn't really appreciate. As it is a public pit, it is totally understandable that pork is not allowed but we wished we could have been told prior to the stay. We had brought some marinated pork belly and we had to throw it away :( 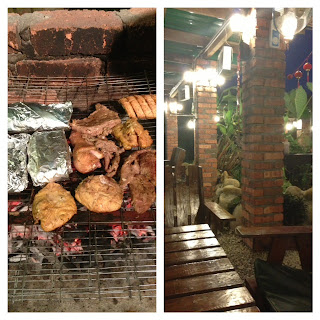 To be honest I had no expectations when we ordered the food - We just wanted to have the pit free as they will charge unless you order a certain amount of food from them.  It was all good as the potato salad and fried rice was the bomb. It was nothing like any of what I have tasted, very delicious. Marinated meat too was good. 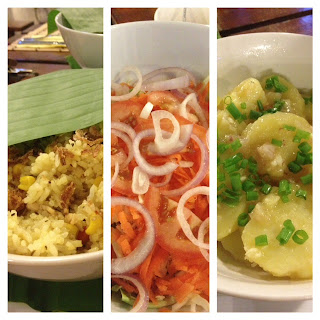 Breakfast is provided but because the resort does not expect hundreds of guests at once, the choices are not as much as what your 5 star hotel would but I can give an assurance is that they are damn good, The Nasi Lemak I had was the best I had in a long, long time!

Marketing has been kept minimal and I believed many customers are here based on word of mouth from happy guests and I hope it is kept this way - "Ipoh's secret". I would not want a beautiful place like this to be exploited in the name of greed. 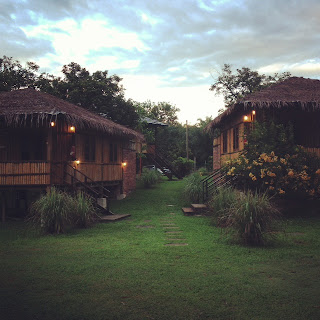 That said, with me writing a lengthy positive review bare in my mind that this is not the place for everyone. If you just want to find peace and tranquility just by doing nothing at all faraway from the city, then this would be the perfect place for you.  In my book that is what holiday is supposed to be and that's the reason why I really enjoyed the place. 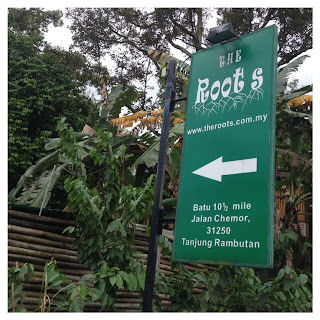 Thank You The Roots for making the getaway an awesome one.  Looking forward my next stay!
Posted by Melanie at 11:40 PM 3 comments: