How to make Chinese Sandwich

For those who followed my twitter, you would know that I am currently in Kuching for a short break. I wanted to blog about it the night before I fly back, but I had some meetings and last minute stuffs to attend.

It isn't exactly a holiday for me, as I am still rushing my assignment up till today and finals is just a week away!! It scares me just to think of the amount of book i need to read for the coming next three weeks! :(

Let's get our mind off to some happy stuff shall we? I made myself a nice sandwich for breakfast! This is very much inspired by Huai Bin's Korean Sandwich :p

Got my mum to bake me a loaf of whole meal bread. Nothing like a good home made bread! 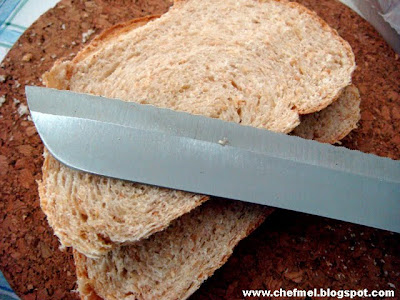 Sunny side up and luncheon meat. 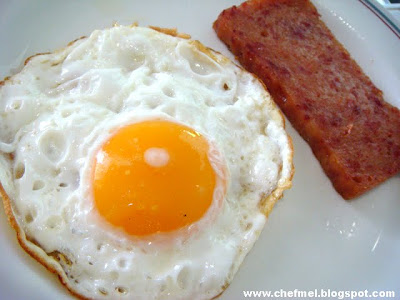 Thinly shredded cabbage and cheese. Man, I've been having cheese cravings for yonks! 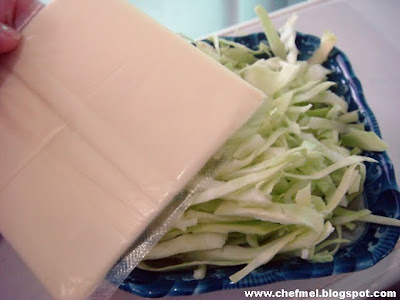 Tower them up and this is what you get. The egg yolks overflowing, damn classic! 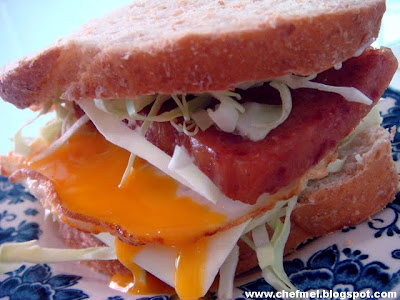 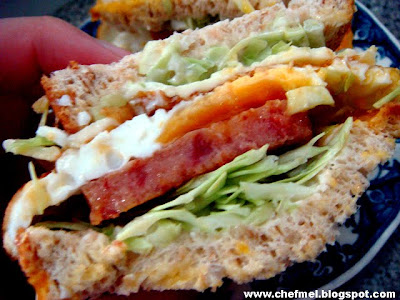 After reading so much about Krispy Kreme on the Internet I swear to the moon, stars and sun that I must have a bite one day! So when the news of Berjaya bringing Krispy Kreme to Malaysia broke out, needless to say I was exhilarated. 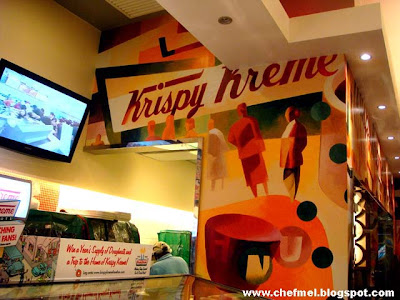 I was a little dissapointed when they decided to open it in Times Square as it's a little time consuming for me to travel there from the airport (and then back to the airport again). I guess they heard me , and just few months later they open one in Midvalley! Halleluiah! 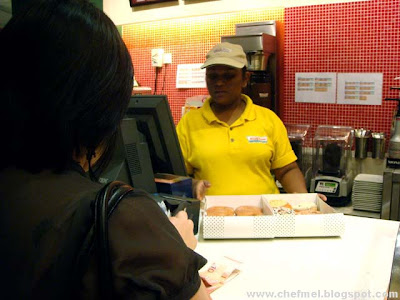 I have a little confession though. As excited as I was, the first time I was there I actually walk through it and told my sister I couldn't find it? Well, i was expecting long queues but it turns out the shop was rather empty. 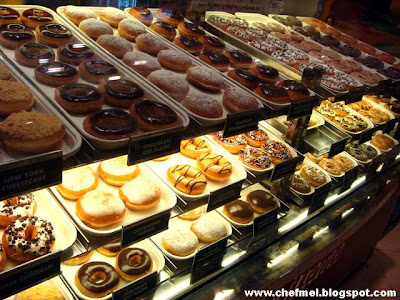 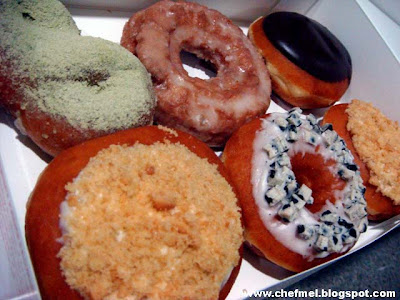 It's a lot cheaper to get two dozens but since I am the only one eating and I am not blessed with a good metabolism rate to burn all the donuts later, I decided to just get a dozen. :p 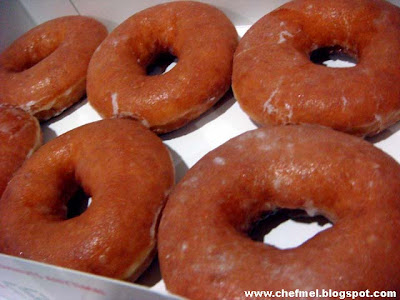 Texture wise, Krispy Kreme's dough is fluffier and in a way, heavier. What I really like about Krispy Kreme's donuts is the ones that comes with toppings are not "wet" and even if you leave it for two days, it still stays fresh and "in shape". It's a total different case with Jco and Big Apples. Leave it for a few hours ,the donut will flattens and you just don't feel like eating it anymore. 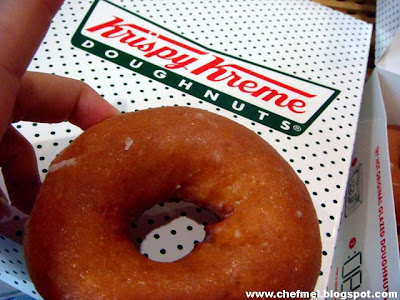 The New York Cheesecake is the best amongst all the flavors. The creme filling was just so, so, so, so good. If I were to die tomorrow, i will have this as my last wish. And after that I will die happily and have no regrets. :D 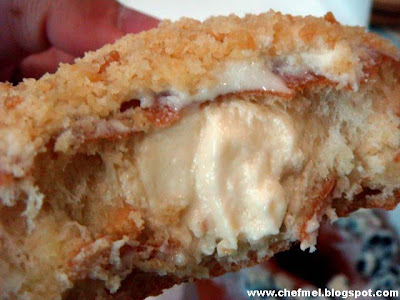 Second to that is the Glazed Vanilla Cake. The thick glazed crust that coat the outer layer melts in your mouth and is a sure way to give a good sugar rush. Mmmm. Nom. Nom. Nom. Nom. 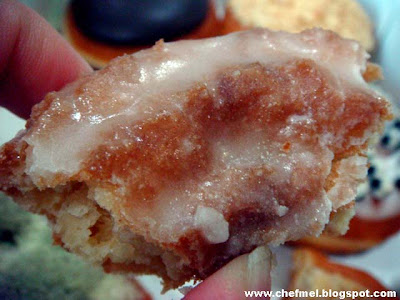 If you're a fan of Hershey's cookies and cream then this will be for you. I thought it was nothing spectacular though I have to give them credit on the generous amount of toppings. 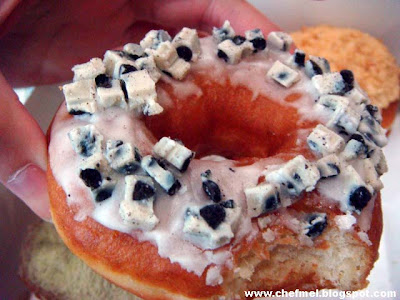 Oh, did I say I bought an extra seat in Air Asia just to put my boxes of Krispy Kreme? 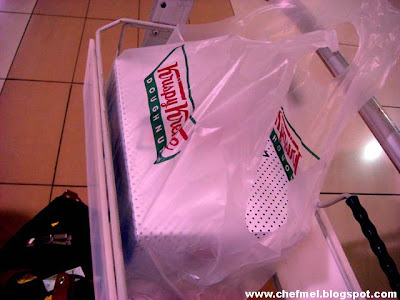 This is Krispy Kreme checking in, in LCCT- KLIA. 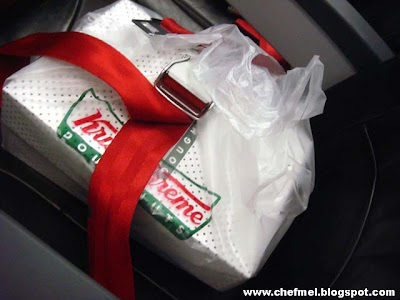 How to make cheese and bacon fritata

For those who doesn't know what fritata is, it is actually the Italian version of omelet. The only difference with the conventional French omelet is that this one is baked.

You will need grated cheddar cheese, cubed sausages, ring olives and pre fried bacon. Fritata in general had tomatoes too but I skimmed that out because I don't like tomatoes. :P 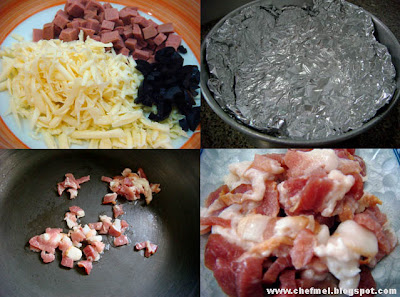 Whisk the above ingredients with two eggs and add in salt, white and black pepper and a small knob of butter. Just before you put it in the oven, top it with more cheddar cheese. 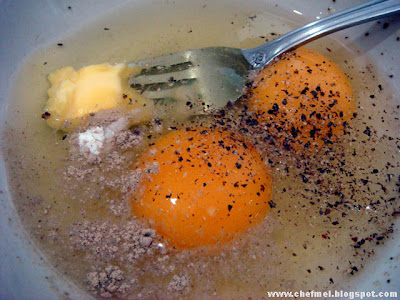 Have your round baking pan wrapped with aluminum foil so that it doesn't sticks on it. 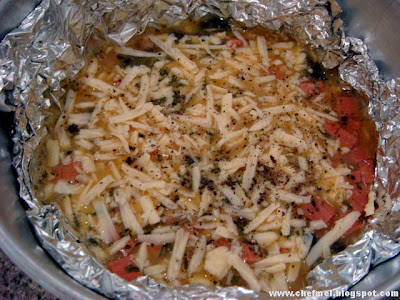 Bake in the oven for about 15 minutes (or till cook) and viola! 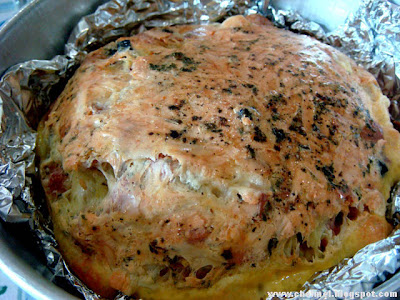 I had this for my brunch so I also made ham sandwich and fried hash browns to go with it. 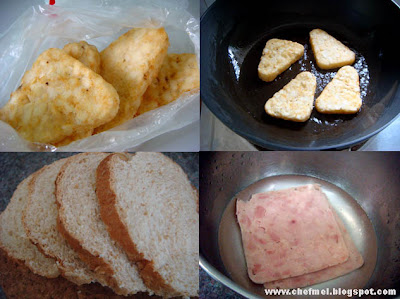 It doesn't take a genious to prepare ham sandwich - basically ham, wholemeal bread, lettuce and mayonaise. While for the hash brown, I just had it fried. :P 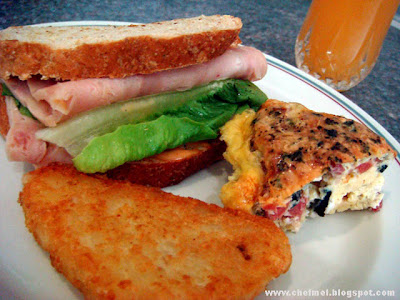 Big brunch platter with orange juice. :)
Posted by Melanie at 5:12 PM No comments:

It's full moon tonight. They say if you wanna have baby boy, you can try your luck tonight. ;P 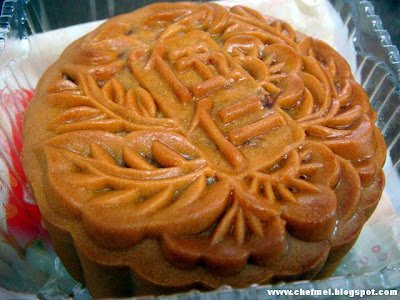