Ice creams! We all loved it!

Haha. Im a fan of ice cream. And mind you, only good ones satisfy me.

So when i was in kl , i tried almost every famous ice cream chain altho' some of it could cost a bomb. the only popular ones that i didnt try was baskin robbins. coz i tried it during my previous trips. ofcourse, i didnt haf the time to try the underdogs chains as well. Jus some popular ones. 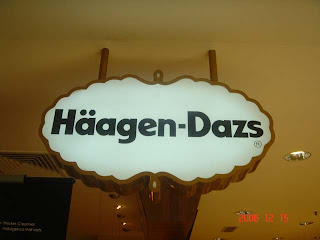 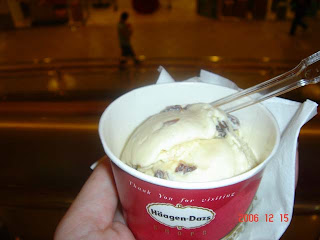 Haagen Dazs!if u never heard of it, go and long piak. they are bloody popular despite the expensif price and I've been dying to try it . Kuching have it too but i think it must be in the fridge for half a decade. kuching -aiks wudn't pay more than rm 2 for an ice cream. haha.but in KL u see ppl queeing for it. bloody rich.damn. however , i was quite dissapointed coz it didnt taste as good as i thought. I tried one of their famous flavour (and also my favourite flavour for ice cream.) it's rum and raisin. the smell of rum is pretty strong , but i find the ice cream not creamy enough. It's one scoop for rm 9.35 , one small scoop to be precise. I got chased by this lady whu keep asking me to donate for oh-i-dunno-whu after i bought the ice cream. she must've thought... " wahh, yu chien ren. ke yi chek ice cream!"...haha. she keep blabbing bout i duno what , and i gave up and gaf her rm1. (she actualli asked for rm30. bt i gaf her that "siau ar u" look. haha.) [ chef mel rating : 6/10] 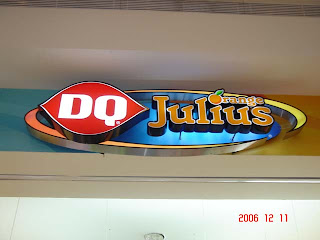 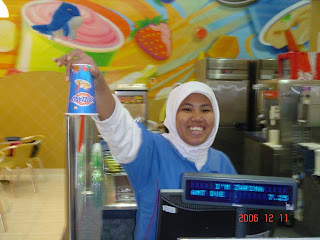 The next stop is, Dairy Queen. It 's so popular in the overseas. Even Donald Trump has a game of it! I had my Dairy Queen Ice cream in Allamanda Putrajaya. Apparently i havent seen it in any whr else. I choose the snickers flavor . The make it something like... ermm.. mcflurry. u choose the flavor then they'll "blend" it with i-dunno-wt-machine . And they'll serve you upside down, and if it drip, u dun haf to pay. haha. hw i wish it dripppppped! haha. it's quite cheap surprisingly, Just RM 7.80 for one huge cup.! but i tink the snickers is a bit toooo big ! felt so tired munching it! haha!i also found dairy king in seremban bt din try it .( the girl was on cloud 9 when i asked her to pose for me. haha, i was actualli hoping it will drip. lol.. i asked her to pose like 3 times. lol ) [ chef mel rating : 6/10] 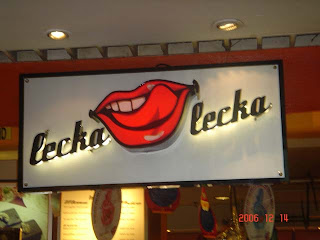 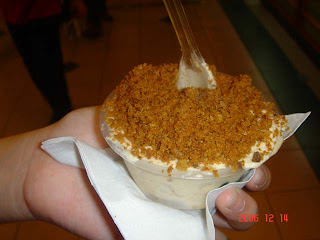 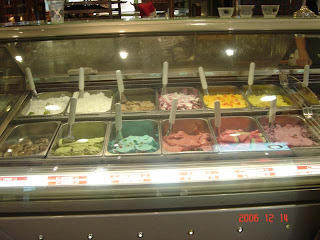 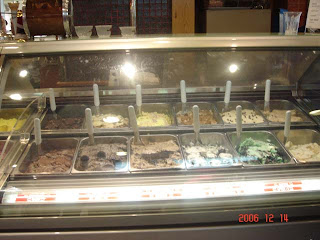 Then it's lecka lecka. I tink it's a chain under famous amos as well. not so sure :) . they haf sooooo many flavours to choose from , and i realli didnt noe wt flavour i wanted. i tried almost 5 and my sis said "are u done with trying? juz pick one la"..... bt i was still unsure. shytt, i mean , u dun get to see varieties of ice cream in kch ok! so anyway i trusted my sister's choice, which is cookies. it came with toppings of famous amos crumbs . (it must be the left overs. haha)the portion is juz right , unlike the super tiny scoop from haagen dazs.and even tho i like colours, i didnt bother to taste any of the fruit flavours. hehe. i dun realli like fruit flavoured ice creams. :P anyway , i must say this one is one of the best. the price is pretty cheap too. but i cant rem tho. i think it's around rm6-7. [chef mel rating : 9/10] 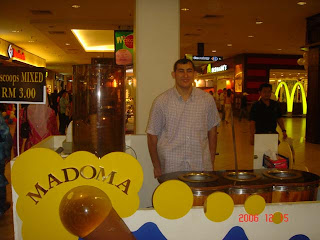 For those in KL, u'll noe this one. He's very very popular for "throwing here n thr" the ice cream. haha. the speciality of the ice cream is the "stickyness" of the ice cream.it's like a dough n he'll "throw" it up and down with a so-called stick. it's not like those ice cream u always eat where u'll need tonnes of tissue to wipe the melting ice cream. so parents, this is a good ice cream for ur kid! haha. :P the ice cream taste damn good oso. this is also my dad's favourite and he NEVER missed it everytime he 's in kl , and can eat EVERYDAY. haha. the man is reali nice too , and he actually posed for me. haha. and , he'll trick you by quickly dropping the cone n later turn it again. i like this one! [chef mel rating : 9.5/10 ] 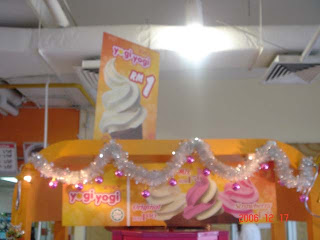 and thr's this yogi yogi machine. its a franchise thing. n seen almost everywhr in KL. noting special about it , but yea , its nice and cheap. rm 1.50 for mix, rm1 for original. i tasted both. even tho it's normal ice cream, i still think it's nicer than most of those machines u see in kch. send one yogi yogi here pls! :) [chef mel rating : 6/10]


I like your blog!
If you are staying in Kuching, do you mind to do me a favour??
Test & taste "Dream Cones" Galeto & come back to me :)

I knew it only have one in Kuching & i can't find it in KL!

Please contact me as 'tauruswan@time.net.my' of coz i will check your blog....hope to see the photo of it!